The long-awaited HP PageWide wide-format printers began shipping this fall, which is a good reason to review all of the single-pass wide-format color printers available and see what has changed with them since HP announced its entry.

The basics of all three technologies discussed below – the PageWide, the Memjet printers, and the KIP 800 series – are that they print large-format color documents at high speeds and for virtually the same cost as monochrome prints. This development will probably change the reprographics industry (click here to read the accompanying article about this topic).

First, here’s a quick refresher on PageWide. The printer, first announced by HP in June 2014, uses an array of inkjet heads to put down CMY and K all at one pass. This means it’s fast – the production version, the XL800, cranks out 30 D-size prints per minute. PageWide uses pigmented ink, which generally provides more durability than dye-based ink. The MSRP of the XL800 is in the $60,000 neighborhood, depending on options and volume. (Click here to read past articles about PageWide.)

“The demand has been strong for PageWide,” says Jamie Sirois, the PageWide XL business development manager. “We are shipping the higher-end printers already, and have several installed at resellers and reprographers.”

HP has learned from beta installations that the driver, SmartStream, needed some enhancements, Sirois says. “So we’ve made it more robust and added some features, some ease-of-use things. For example, we’ve added functionality for stamping.”

HP has promoted the PageWide as a technical document printer more than a graphics printer. And that’s what it’s being used for so far, evidently. “The primary application has been CAD-based solutions,” Sirois says. “We do see a lot of customers in GIS/mapping as well, and we have users pushing the printer to see what else it can do. But we are emphasizing it as a technical printer, designed for technical drawings, GIS, short-term indoor signage or posters, etc.”

PageWide’s path to market has not been entirely smooth. Memjet, which launched the single-pass inkjet head concept several years before HP, accused HP of patent infringement and filed suit in August. In November, a German court decided the accusation had enough merit to issue an injunction against the sale of PageWide in that country.

Achim Carius, executive director of motio, the German reprographics association, has implored the two parties to settle the case, because it is causing confusion in the marketplace. “The patent dispute between the two American manufacturers Hewlett-Packard and Memjet Technology cannot be disputed on the backs of European customers,” said Carius, whose association includes members in Germany, Austria and Switzerland.

Competitors, naturally, hope the lawsuit pushes buyers in their direction. “Our viewpoint is that Memjet defined single-pass printing, and they have a proven and commercially viable technology,” says Erik Norman, vice president of sales and marketing for RTI, one of the Memjet OEM partners. “Why wait on making that decision when you have a solid performer available today?”

For its part, Memjet says the introduction of HP’s PageWide has helped, rather than hurt, sales.

“HP’s emergence in this category really validates the entire market and confirms the fit for single-pass in the wide-format marketplace,” says Kevin Shimamoto, general manager for Memjet wide-format.

Shimamoto says that when HP first announced their forthcoming printer, it created some market confusion and caused potential Memjet buyers to feel compelled to research both solutions.

“I’d say that about a year ago when HP announced, and up until a few months ago, there were some questions about what single-pass is and what it’s value is,” Shimamoto says. “Throughout that time there was a lot of confusion. But HP has done a good job of educating the market and has helped the market see what the solutions are. So now as HP comes out with the printer, people can make good decisions about which solution is a good fit for them.”

Furthermore, Memjet and its OEM partners didn’t sit around and wait for HP to launch PageWide, Shimamoto says. The companies worked with their installed bases to lower costs and improve their offerings.

Shimamoto says Memjet and its partners have made improvements recently in three areas: cost, reliability, and overall image quality.

“Our early feedback on running cost was that it needed to be closer to black and white, so we worked with our OEM partners on strategic pricing to enable them to reduce their pricing,” he says. “Since they buy all ink and heads through Memjet, basically our cost and pricing drive their pricing. So the more we can work with them to strategically target specific segments, based on detailed plans, the more we can enable them to get the pricing where it needs to be.”

Shimamoto says the three OEMs using Memjet heads – Canon/Oce, Xerox, and RTI – have all worked to improve their equipment stability and quality in the past two years.

“IRgA members should make sure they look at Canon, Xerox and RTI, because if they have not looked in the past three months, they will see new things,” he says.

Canon/Oce made significant changes to its Memjet-driven printers with the launch in November of the ColorWave 910. This is an upgrade to the ColorWave 900, which has been on the market about two years. 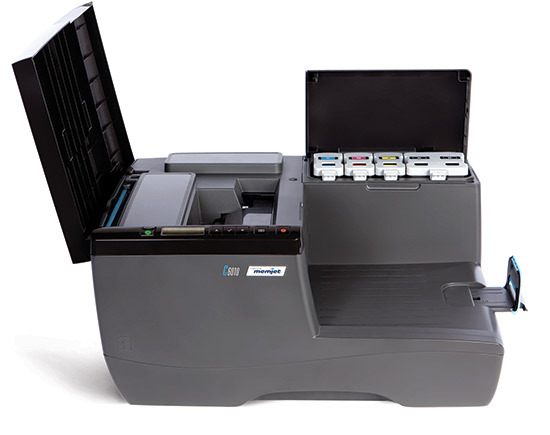 “For instance, we changed the print path on the 910, so now it handles stiffer media 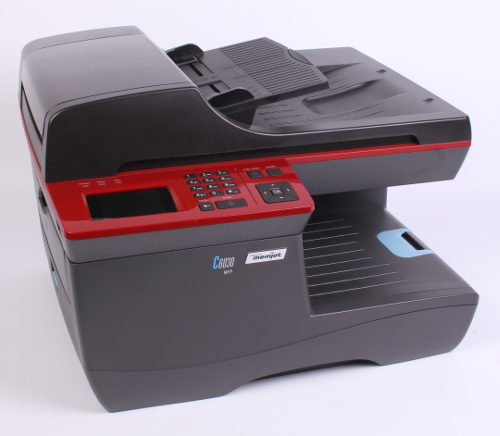 Finally, Canon/Oce created a new controller for the printer. Among the new features are improved diagnostics and the ability to print color scanned images in monochrome, which was a customer request.

The 910, which can print in either the 6-inch-per-second mode or the 12 inch-per-second mode, also costs less than the 900. Its MSRP, depending on options, is in the low $80,000s, compared to low $100,000s for the 900 initially. Furthermore, Canon/Oce is running a special through the end of this year that knocks about $20,000 off the MSRP; buyers who take advantage of that offer also get as much as $100 off each two-liter container of ink as long as they own the machine.

Norman says RTI has spent a lot of energy improving the Windows driver for the Vortex, its Memjet-driven printer. The improved Windows driver helps reprographics shops that don’t need the sophistication of the Caldera RIP. And they’ve worked with Caldera and another RIP vendor, TG Soft, to improve workflow with the addition of nesting functions, color

management, and other improvements.

“That has given us a better capability to satisfy reprographic customers who want that,” Norman says. In addition, RTI dropped its prices. “Our list prices a year ago for the printer only were about $105,000, and now they’re around $85,000,” Norman says. “And we believe that the total cost of operation is about 20 percent lower than HP’s, especially on high-coverage graphics.” Drivers jands.

Xerox has created a multi-function version of the IJP 2000 by combining the printer with the Xerox 7742 scanner. The Xerox 7742 Scan Solution has an optical scanning resolution of 1,200 dpi, with user selectable resolutions at 50 dpi increments between 100 and

The Performance Package, introduced in May, also enhances image quality by correcting the streaking and banding that can occur with single-pass inkjets.

The single-pass inkjet machines have received a lot of attention lately, but KIP offers an alternative that provides similar performance with some advantages.

The KIP 800, which was introduced at Graph Expo in Chicago in September, is a wide-format, single-pass CMYK toner printer that can produce 2,880 square feet per hour. It’s slower than high speed single-pass inkjets, but still capable of handling more quantity than

most shops would ever need.

“The customers are really attracted to dry toner imaging for its durability and low cost. Also, the 800 series has consistent speed technology – it doesn’t have to stop for cleaning, it doesn’t slow down on complex images, and there are no issues with stacking or folding multiple sizes or sets of color and black and white prints. The market response has been enthusiastic and the demand is exceptional for the KIP 800 Series,” says Tim Horn, KIP’s vice president of sales.

The price for the 800 Series is attractive – the 870 version, which features four rolls and is designed for production environments, has an MSRP $29,800. And the printing cost of color and black & white operation is extremely low, Horn says.